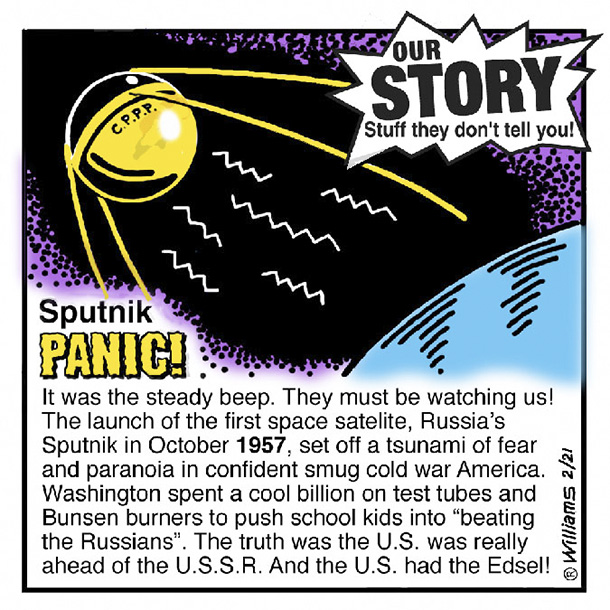 OurSTORY text The graphic shows the first Russian satellite Sputnik, in space above the earth in a stippled style out of an old sci-fi magazine. Sputnik Panic It was the steady beep. They must be watching us! The launch of the first space satellite in October 1957, set off a tsunami of fear an paranoia in confident smug cold war America. Washington spent a cool billion on test tubes and Bunsen burners to push school kids into “beating the Russians”. The truth was the U.S. was really ahead of the U.S.S.R. And the U.S. had the Edsel! 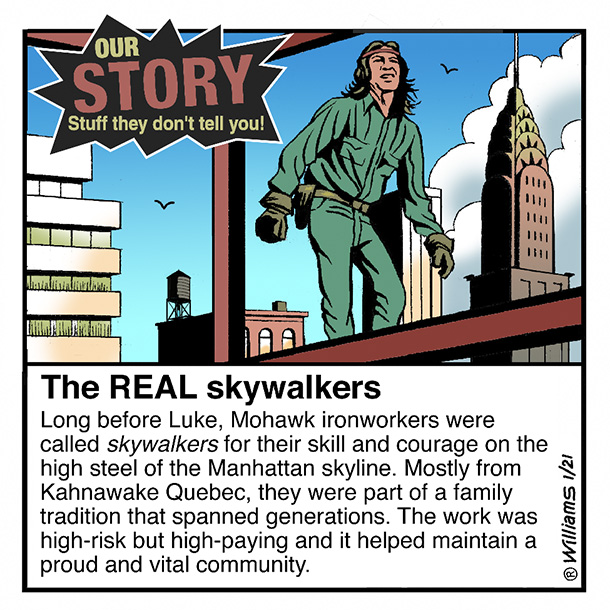 The real Skywalkers The image shows a Mohawk ironworker walking on a girder high above New York as well text as image. Text: Long before Luke, Mohawk ironworkers were called skywalkers for their skill and courage on the high steel of the Manhattan skyline. Mostly from Kahnawake Quebec, they were part of a family tradition that spanned generations. The work was high-risk but high-paying and it helped maintain a proud and vital community. 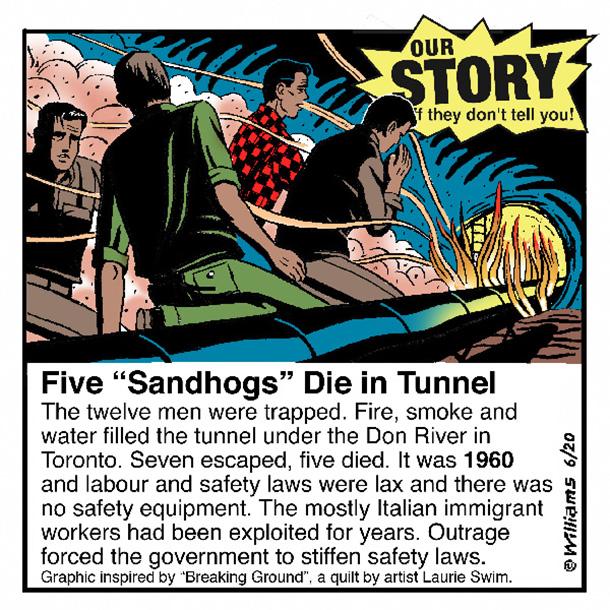 Five “Sandhogs” Die in Tunnel The twelve men were trapped. Fire, smoke and water filled the tunnel under the Don River in Toronto. Seven escaped, five died. It was 1960 and labour laws were lax and there was no safety equipment. The mostly Italian immigrant workers had been exploited for years. Outrage forced the government to stiffen safety laws. 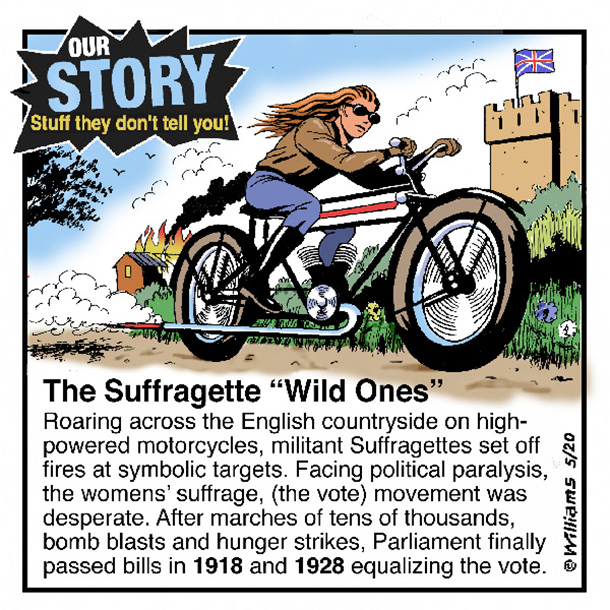 The Suffragette "Wild Ones” Roaring across the English countryside on high-powered motorcycles, militant Suffragettes set off fires at symbolic targets. Facing political paralysis, the womens’ suffrage, (the vote) movement was desperate. After marches of tens of thousands, bomb blasts and hunger strikes, Parliament finally passed bills in 1918 and 1928 equallizing the vote. 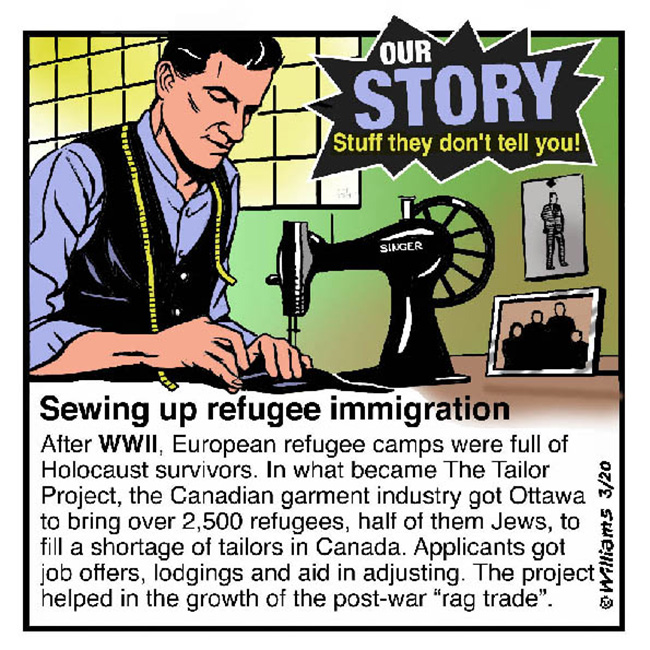 Sewing up refugee immigration (headline) After World War two, European refugee camps were full of Holocaust survivors. In what became the Tailor Project, the Canadian garment industry got Ottawa to bring over 2.500 refugees, half of them Jews, to fill a shortage of tailors in Canada. Applicants got job offers, lodgings and aid in adjusting. The project helped in the growth of the post-war “rag-trade”. 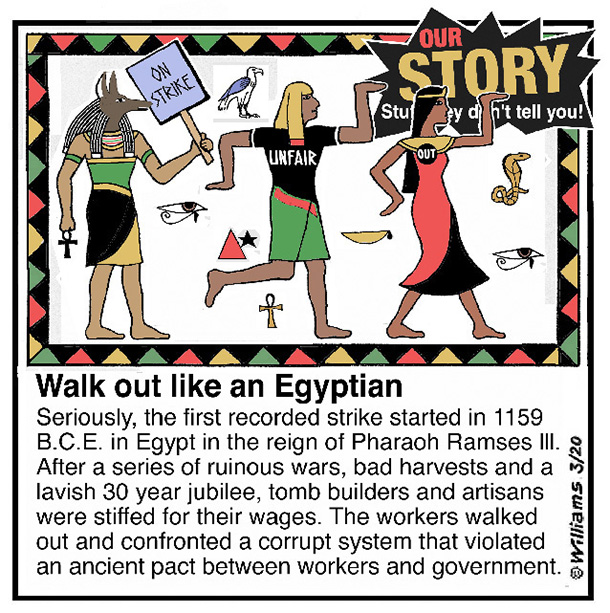 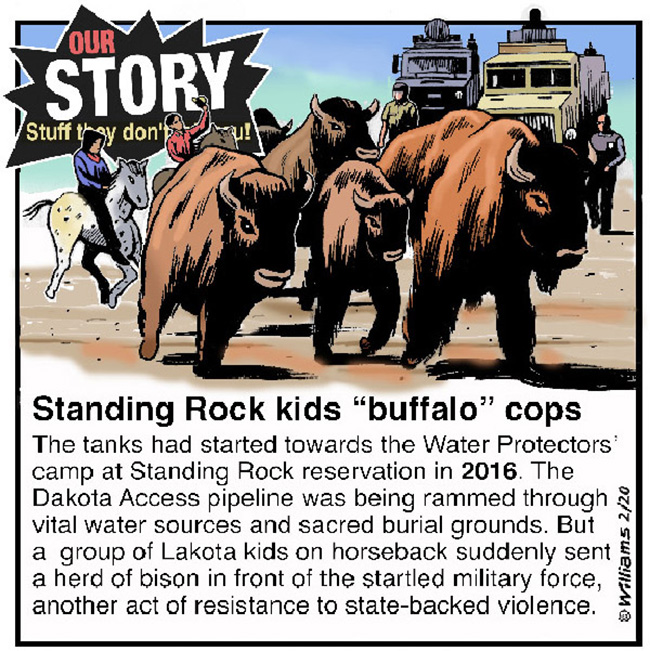 Our story. Stuff they don’t tell you by John Williams. A herd of buffalo charge toward the viewer, stampeded by Lakota native youths at the Standing Rock reservation protesting the Dakota Access pipeline. In the background are private cops and military and vehicles, now cut off from advancing on the Lakota water protectors.

Our story. Stuff they don’t tell you by John Williams. Heading: Clowning around in Orange Toronto The image shows a tavern brawl in toronto in 1855 between clowns from a travelling circus and firemen. The riot exposed the power of the bigoted Orange Lodge, to which all firemen belonged. Anti-Catholic, anti-Irish and anti-immigrant, it had a lock on all civic jobs. 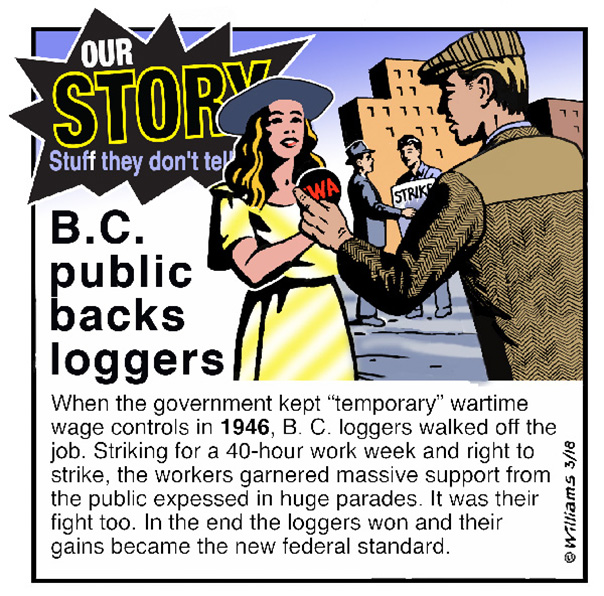 Our story. Stuff they don’t tell you by John Williams. B.C. Public Backs Loggers. When the government kept “temporary” wartime wage controls in 1946, B. C. loggers walked off the job. Striking for a 40-hour work week and right to strike, the workers garnered massive support from the public expressed in huge parades. It was their fight too. In the end the loggers won and their gains becamne the new federal standard. 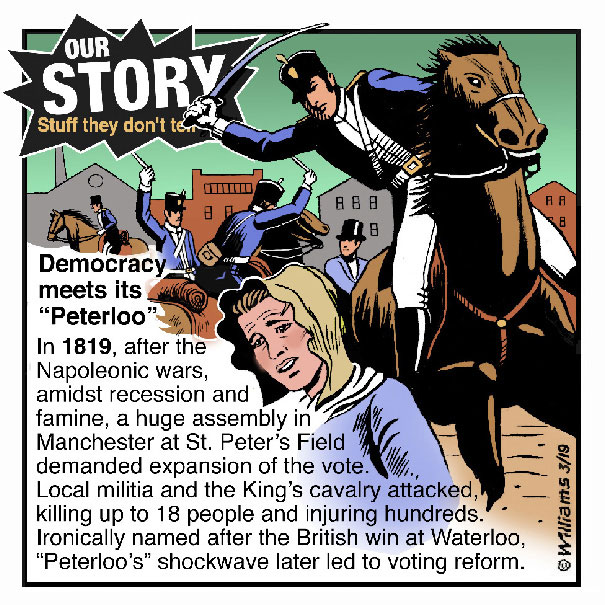 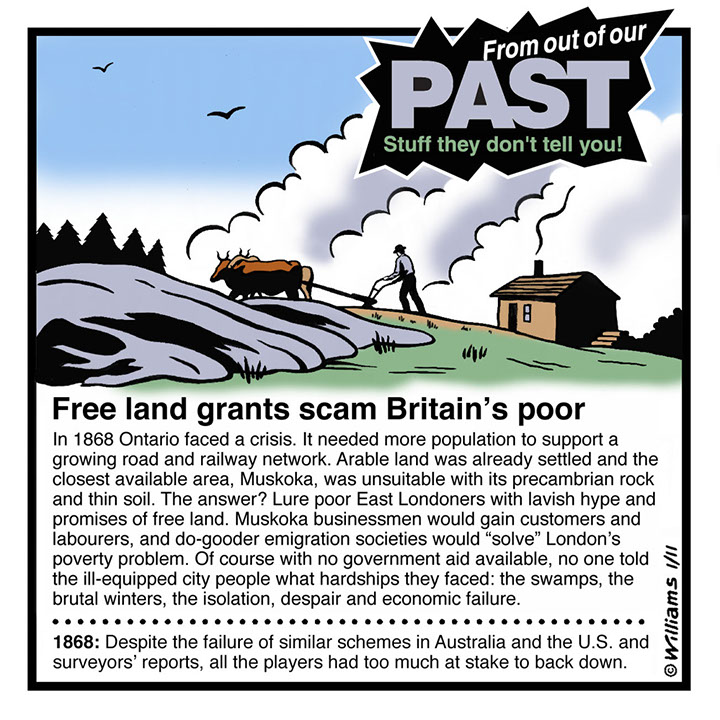 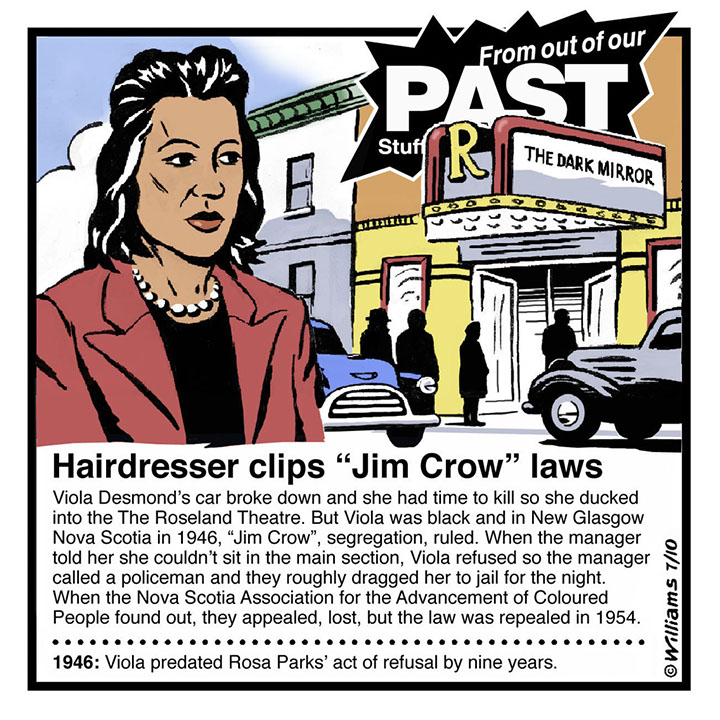 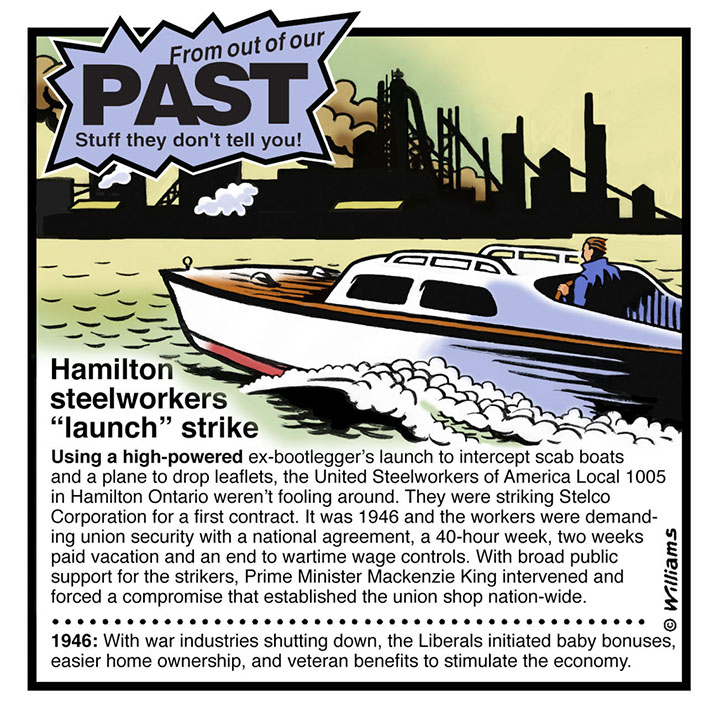 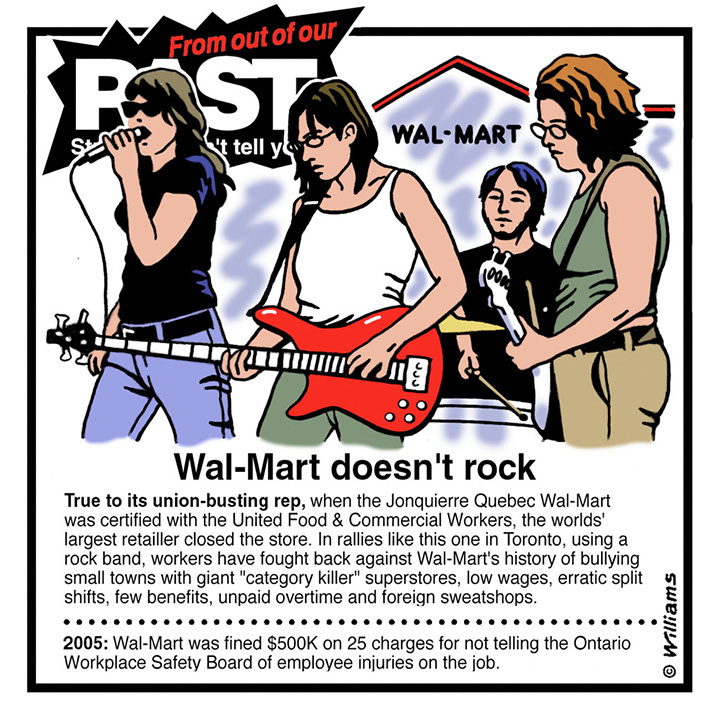 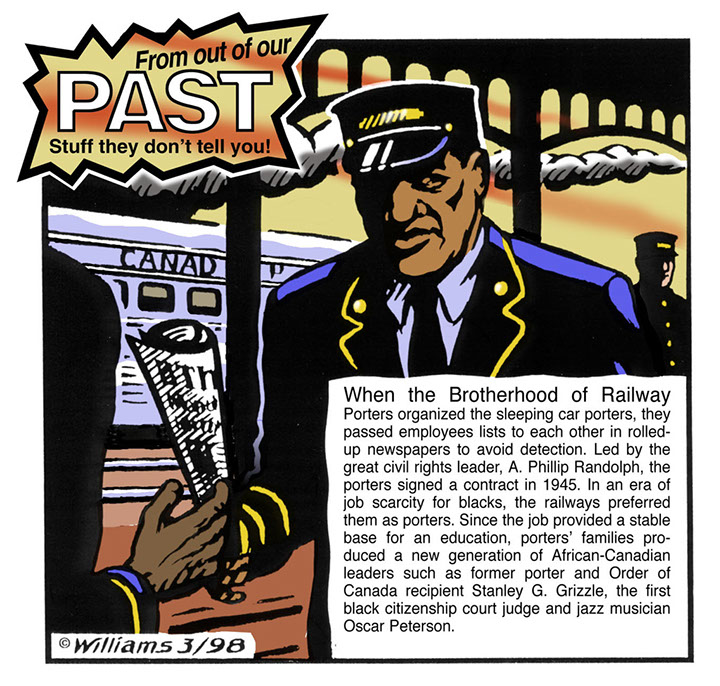 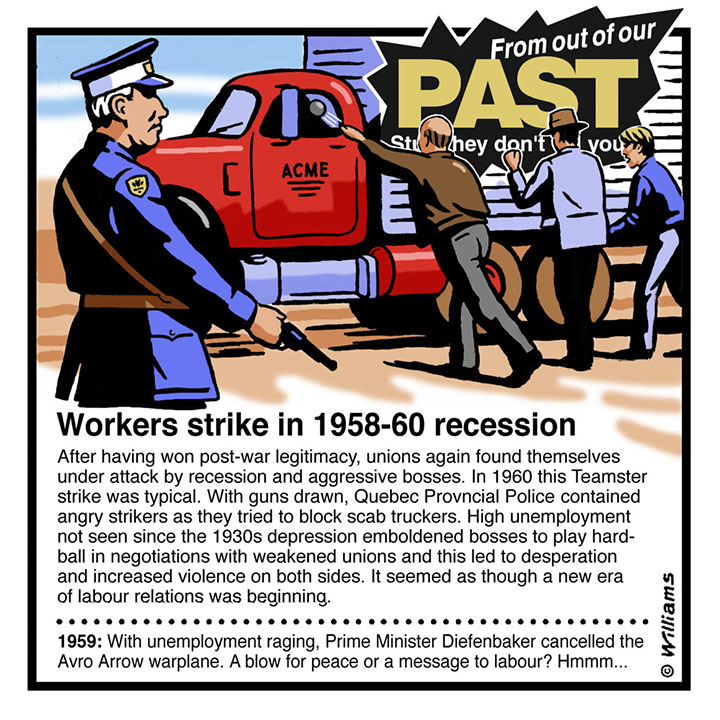